Be Careful What You Wish For- You Just Might Get It 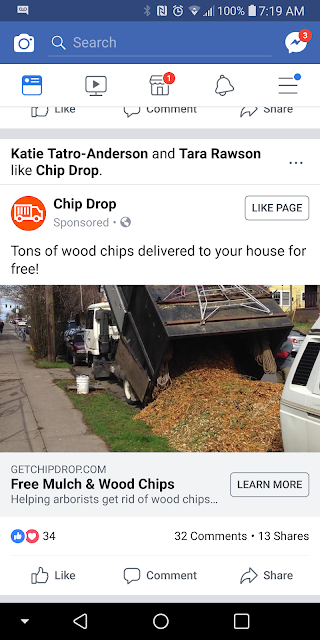 Bright and shiny, this Facebook advertisement caught my eye. All I had to do was sign up to be on a list and a friendly arborist would drop a neat pile of mulch in my driveway. The form warned that there might be some leaves in the batch. Not a big deal. What were a couple of leaves when you could mulch your beds for free? I clicked “submit” and sat back, waiting for a pick-up truck of mulch to appear in my drive.

See that lovely little pile of mulch in the picture? That would look lovely in my flowerbeds. Last spring, it took several trips to and from Ace Hardware with my van packed full of bagged mulch to get the job done. Not only would this drop-off service save me trips, but it would also save me money. Win, win!
Weeks passed.

In the busy rush of life and raising children, I forgot about mulch and trucks and replenishing my flower beds.
Until one night, there was a knock on the door.

A thin man stood before us, face dirtied from hard work and deeply tanned by the oppressive Florida sun. “May I help you?” I asked tentatively.


“Ma’am, did you order some mulch?” he asked, whipping his brow with the back of his hand.
My face brightened. “Yes!”


“Where would you like it?”
“The driveway is fine,” I replied, grabbing my shoes and joining him out front as he returned to his truck.


Lumbering into my drive was no pickup truck. No… it was an enclosed dump truck. The back rose with a screech and mulch cascaded like a waterfall, 10 feet wide, 16-20 feet in length, and at least 8 feet high. The driver waved as he drove off.
I stood there, frozen. My mouth hung ajar.

Cars slowed down. Drivers stared. A few houses down, my neighbor was keeled over with laughter. 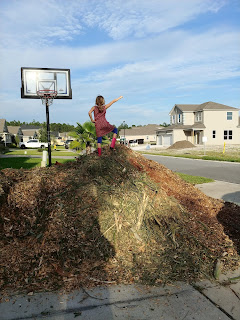 Yes, there was mulch. There were also tons of sticks, palm fronds, spiky saw palmetto, tree bark, leaves, stumps with roots still attached, and bits of logs. I didn't want to look a gift horse in the mouth, but dang. Now there was some really good mulch here too. But at least half was debris. What on earth would we do with this?


We do not live on a farm. We do not live in the country. We live in a very nice neighborhood just outside a major city, the kind of neighborhood with an HOA.
What would they say? Would they do? Images of warning letters and fines flooded my imagination. 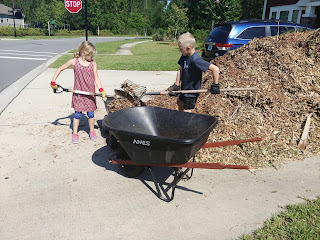 One neighbor brought over a garden wagon. Another brought a wheelbarrow and pitchfork. The kids and I shoveled and dumped, shoveled and spread until it was dark. The next day was the same. Out the window went gym plans or anything else. This was enough cardio and strength training for a week at least.
I posted a picture on our neighborhood FB page offering mulch to anyone who might want some.


No takers.
One neighbor wished me good luck.

Another recalled the time he had gotten a mulch drop, “If you don’t move that pile fast, it’ll get hot and attract critters.” 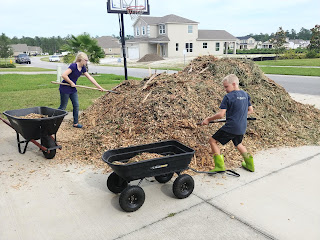 
One man showed up in the rain and filled a tarp in the back of his SUV. Another brought a trailer attached to his sedan. We struck up a brilliant conversation about gardening and plants. Yet after he left, the mountain remained formidable.
We scooped jumbles of hot, steamy palm fronds and leaves into the wagon. A three-inch Palmetto bug scurried between my legs. Another scoop with the pitchfork uncovered a giant, Southern Bullfrog. We found a bag of dog waste and shredded tissues too. I changed out of shorts and tennis shoes in favor of jeans and hiking boots, despite the humidity and heat. What other creepy crawlies lurked within?


The flower beds filled fast. My garden was lush and happy. Where else could it possibly go?
Yet we were determined. The kids and I got up early the third day and hit that pile with a vengeance. We shoveled and dumped, shoveled and spread.

There were many, many breaks for popsicles and ice cream.


I may have Googled waste disposal services and cried about how much my free pile was going to cost me if we had to utilize one.
Over 200 wheelbarrows-full of mulch were spread. Hundreds of wagon-fulls were dumped. My garden and flowerbeds, border and yard were flush with more mulch than I ever imagined. The kids’ nature trail system in the preserve behind our home is now beautifully lined with a thick layer of mulch, leaves, and sticks.


We may have yelled and cheered triumphantly when the last of that pile landed in the wheelbarrow.
Our neighbors may think we are eccentric.


But that’s fine with me. We learned some major lessons here.
No job is too big if you tackle it a scoop at a time and teamwork is always better than working alone.

Be careful what you wish for. You just might end up with a mountain of mulch in your driveway. 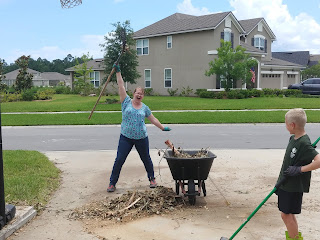 And nothing is really free. That pile cost hours of sweat equity, kid labor (they are expensive workers!), and an exciting trip to Golden Corral. I told them I would take them absolutely anywhere they liked for dinner if they helped make that pile disappear. They were thrilled to gorge on the dessert buffet and I was too worn out to really care.
Three days. It took us three days to destroy that mulch mountain. I'm so proud of these hard-working kids.
Perhaps not everything one sees on the Internet is as good as it seems. I vow to never again order a mulch drop. I don’t care if it’s free and delivered.

But dang, we did a good job.

Popular posts from this blog

Hiking With Kids- Rejuvenate Your Soul, Inspire Your Mind 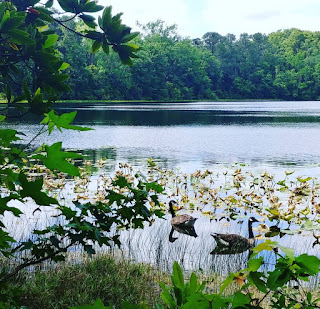 There's just something about nature and being way out on a trail with the twittering birds and seasonal flora that keeps me coming back again and again.

Perhaps it's because I was born and raised in the Pacific Northwest, in the shadows of mighty Mt. St. Helens and among the misty fir forests.

I feel more alive in the woods than anyplace else. I love the workout. When hiking, I use muscles I wouldn't ordinarily use. Blood pressure decreases. My heart grows stronger.

Any season is great for hiking and has a lot to offer, but I am partial to spring.  Here in Ne Florida, the forests are thick with vibrant greenery and birds abound.  The eighty-degree weather begs for outdoor activity and feels like warm silk on one's skin. How could we possibly stay indoors? The kids and I hit the trails at the University of North Florida today and marveled at the tiny pink and white blossoms on the wild blueberries. We discussed the animals that might rely on…
Read more

Review: The Kind of Parent You Are-- Becoming Your Best Person So Your Children Can Become Their Best Adults 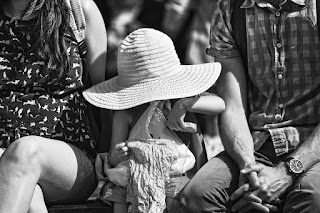 "Knowing who you are and backing it up with behaviors allows you to approach things with purpose. It lets you put more into life. And it allow you to get more out of life-- more enrichment, more satisfaction, and more fulfillment," writes Brian Vondruska in his new parenting guide, The Kind of Parent You Are-- Becoming Your Best Person So Your Children Can Become Their Best Adults. Coming out in late June 2018 from Aurora Park Publishing, this parenting guide has a lot to offer hopeful, expectant, new, and veteran parents alike.

I received an Advance Reader's Copy of this ebook from City Book Review and thoroughly enjoyed swiping through the pages. My official review will publish in the July 2018 issue of San Francisco Book Review.  Here, I'll give a basic overview of the book and share in detail what I loved. 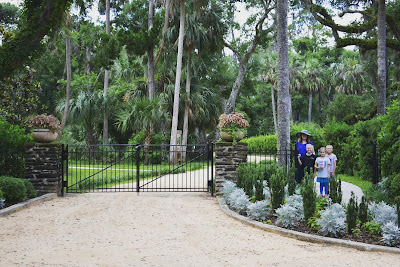 Did you know that George Washington's descendents lived in NE Florida not so terribly long ago?

The kids and I took advantage of a respite in the rainy weather to hike a new trail. Hiking with kids is an amazing way to build an appreciation for nature. Not to mention we were all stir-crazy mad and in need of exercise after so much rain.  We packed a picnic basket full of lunch, some trail snacks, sunscreen, water, a map, and lots of bug spray and hit the road for a new-to-us trail about an hour south.


Washington Oaks Gardens State Park is nestled between the Atlantic Ocean and Intercoastal Waterway in Palm Coast, Florida, south of St. Augustine. I've seen friends posting incredible pictures from this part recently and had to check it out.

What we found was so much more than just another nature trail. Driving by on the highway, one has no idea such an intricate garden even exists and its essence is nearly  as fascinating as its storied past. The highest point in the garden, th…
Read more